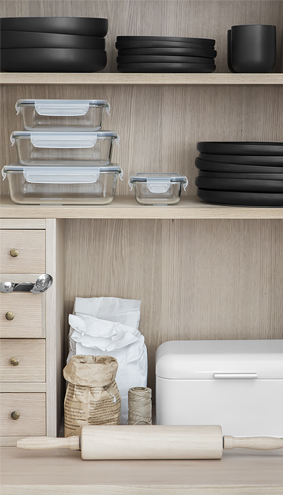 The Duka brand offers a wide assortment for the Kitchen and Dining area, emphasizing on kitchenware, glassware, dinnerware, cutlery and gifts. Each product is selected for its good quality and specific function. The assortment has a contemporary expression with a Scandinavian influence.

The history of Duka

The history of Duka goes back to the 1920's when the Swedish salesman Hjalmar Blomqvist started his first shop for glassware and porcelain in the town of Linköping in the southern parts of Sweden. The following years he continued to open several stores that were all called Hjalmar Blomqvist Companies, which later became the foundation of Duka.

In 1962 the Hjalmar Blomqvist Companies together with a number of other independent glass and porcelain retailers founded Duka. They were 17 to start with, and by working together they could get better deals with suppliers and be more efficient in their marketing.

In the middle of the 1970's Duka initiated a series of processes to develop their own brand. Since June 2009 Duka is owned by Bergendahls. The Duka brand can be bought in several of Bergendahls supermarkets, City Gross and EKO, and the Duka brand is also marketed through independent online stores and stores in Swedish cities.